Went There. Did That.

If there is some sort of annual contest for the worst blog title of the year, I might consider entering this one. [1] But I still like the title I wrote before Bette and I left for France. That title was Being. In France. By that title, I wanted to convey my hope that I would be able to avoid “doing France” and would be able, instead, to be who I am with France as the relevant setting. [2] I’m back now—it is dinnertime in Paris as I write this, so I am only mostly back in Portland—and I am really pleased by how my effort to “be” rather than to “do” worked out.

I thought a lot about this the day I was the Sweep (about which, more later) and I

formulated it as two models of what being in Paris might be like. I am going to call them Mode A and Mode B. This will not fool anyone and I don’t intend it to. I am a partisan of Mode B, for myself at least. This will lead my descriptions of Mode A in the direction of caricature. [3]

Mode A takes “what Paris has to offer” as its starting point. It has French cuisine and the Eiffel Tower and the Louvre and Notre Dame and the famous Left Bank and inescapable cigarette smoke and so on. These are things I can see or do there that I cannot do here. It is that distinction that brings them to prominence. So I want to do them when I can, which is when I am there.  That’s Mode A.  It runs the danger of becoming a checklist and having a checklist puts you in danger of seeing the boxes on the list and not the city at all.  It’s a danger.  Some people can apparently have a checklist and be genuinely charmed by the city.  I am not one of those people.

Mode B takes “what my most genuine interests are like” as the starting point. If I have 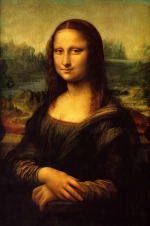 So I “went there,” as the title has it. And I “did that;” I focused on my own settled interests in a new setting. Bette wanted to see some of the displays at the Louvre (above, the most famous one, which she did get to see) so I walked over there with her so she could see the inside. I saw the famous glass pyramid from the outside, for which I did not have to arm-wrestle busloads of tourists, and went on to other things.  I saw a small figure sitting on the extreme western tip of the Île de la Cité.  So I went down there and found a young woman sitting peacefully under a prominent weeping willow, reading a paperback book.  There is a point very much like it is Portland and it reminded me that I really want to go there more than I do. [4]

I went to a bookstore—the book department of Le BHV/Marais, a really major department store—and spent some time seeing how they set up their books.  The whole store is spare and classic, like this department.  What kinds of demand did they 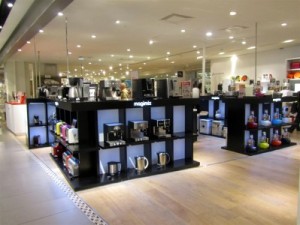 expect? I couldn’t read anything, of course, except in the very small English language section, but I watched people pick up books and look through them. Then I went to Shakespeare and Company, an English language book store founded by American ex-pat Sylvia Beach in the 1920s. [6]

On our way up to the northern suburbs, we watched through the bus window as the buildings got lighter colored (not as dirty as along the river, I suppose) and the people got darker colored and there began to be signs in Arabic on the store fronts.  We wound up at Place Pigalle [7] in the middle of a downpour and took refuge in a little restaurant where I had the most lavish French Onion Soup I have even had.  It had more cheese on the top than a pizza I once had in Milan, but that’s another story.

I watched a lot of conversations going on at the same time at Le Buci. I would have done 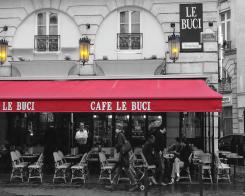 that anyway, at some point or another, but I did it this time at 4:15 a.m. because they were still making so much noise that Bette and I couldn’t sleep in our hotel room across the street. [5] That hour of the morning is not my favorite time for anything but sleeping, but watching conversations form and break up and reform is something I really like to do. By the way, the balcony you see just to the right of the black Le Buci sign was our room.  That’s how far the conversations carried.

All in all, I had the kind of time I was looking and hoping for in Paris. I didn’t ignore the differences in context.  In fact, I celebrated them.  But I didn’t let the differences, alone, set the agenda.  You would imagine that as a Mode B person, I would like to do that for myself and you would be right.

[1] I was thinking of something like the annual Darwin Awards, where acts that demonstrate that you are not really worthy of passing on your genes as described in loving detail. See http://www.darwinawards.com
[2] I am going to be thinking about my experiences in Paris, rather than in France generally, because the non-Paris part of our French trip was a bike and barge trip in Burgundy and “doing” was really most of the agenda on biking days.
[3] For which I apologize to my Mode A friends. I think I would be fairer to their way of looking at it if I spent more time describing it, but I don’t really want to have to put that kind of effort into it.
[4] The Portland spot is Kelly Point Park in Portland, where the Columbia and Willamette rivers run together and make a little point very like this one.
[5] And we couldn’t close the windows because the room was only recently a No Smoking room, or only intermittently a No Smoking room—and when we closed the windows, the smell of old tobacco was nauseating.
[6] The Book Group goes to the Sylvia Beach Hotel in Newport, Oregon most years in the spring. It is located at Nye Beach and is named for Sylvia Beach. This Sylvia Beach.

[7]  The guidebook says that American Soldiers in Paris during World War I called it “pig alley,” which I am sure was intended to be a slur on the red light district, but it also doesn’t say much for their command of French.