At the end of the show—the first episode of the first season of NCIS—Gibbs gets into a convertible driven by a redhead and is whisked away. Why?

The best response I can imagine is, “Who cares?” And the best rejoinder I can manage comes from Salmon Fishing in the Yemen’s Dr. Frederick Jones, who says, “Well…strangely enough…I do.”

Also, there is my identity as a dilettante to consider. If you look at the title of my page, above, you will see that the tagline is: “delight is the heart of the dilettante.” [1] As an operating principle, that means that I wind up writing about whatever snags and holds on to my interest for a time. My interest, it turns out, is easily snagged.

I say it is about Gibbs. Let’s go back to the redhead who picks him up in the car at the end

of Episode 1. They never say who she is. They never say what relationship she has to Gibbs, if any. [3] She just shows up, acquires Gibbs, and heads off. Why the redhead? Because they want to say something about Gibbs. The show is “about” Gibbs.

The redhead is not a hooker. That’s not what they want to say about Gibbs. She is not notably younger than Gibbs—maybe a little. She has short hair. I think Belisario decided that a woman with long red hair would fit nicely into viewer speculations about who she was, so she has short hair. She drives a silver Mercedes convertible. Gibbs gets into the car without greeting her and they drive away. It’s not about the redhead. It’s about Gibbs.

Gibbs has had three wives by the time the show debuts. He needs to be “single,” a word meaning that the affairs he keeps having can’t evolve in the direction of marriage, so that he can be solitary at all times. [4] He is alone when he is at work. People come to him, cases come to him, whoever the director of the agency is at the time summons him. He goes “home” and goes straight to the basement, where he is perpetually working on a boat with hand tools. [5] 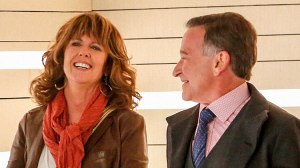 So, since he can’t be married and since he has to be perpetually attractive to women and since being attractive to women who are regulars on the show creates problems for the writers, what we really need is a completely unexplained attractive age-appropriate redhead. That says what needs to be said about Gibbs’s sex appeal and it doesn’t complicate the plot.

Gibbs really needs some kind of understandable appeal because he is “god-like” in all the worst senses of the word, in other respects. It would be tempting to say that he is “unaffected” by people,” but that isn’t really true. He is unaffected by people who are trying to affect him. He relates freely and warmly to people—children, damsels in distress—who need him. “I will have mercy on whom I will have mercy” (Exodus 33) is the short version. [6]

He knows things he really couldn’t know and the show has no interest in explaining why that is. The team eventually just takes it for granted that Gibbs is going to know about “it,” whatever it is, and he always does. That isn’t divine omniscience in any thoroughgoing sense, but it is close enough for network television.

He is not really confined by space the way the rest of us are. He just “shows up.” He doesn’t “come into the room.” He just “is” in the room and he is standing right behind whoever is doing something he or she shouldn’t be doing. It’s not omnipresence, really, but since you can’t ever be sure when it will happen, it winds up being close enough for network television.

Gibbs isn’t funny. That gives everyone around him a chance to be funny and we get to

enjoy all that repartee, but it doesn’t affect Gibbs. Gibbs has access to irony on occasion, but he doesn’t laugh when everybody else laughs. Why?

Well…it’s like the mysterious redhead. [7] The show is about Gibbs. Gibbs is whoever he needs to be to set up the show. If you are going to have all that godlikeness, you really need a mysterious redhead in a Mercedes.

Do you watch NCIS? Bette and I do. It’s about Gibbs.

[1] It is, actually. The English word dilettante derives from the Latin delectare, “to delight.”
[2] Donald Bellisario, the creator of the series, was a marine himself and is relentlessly positive about the corp’s virtues.
[3 NCIS is a show that relishes inside jokes. Although no one knows who “the redhead” is on the show, everyone knows who she is in real life. She is Vivienne Belarisario, the fourth wife of the show’s creator and she is Sean Murray’s mother. Murray plays Agent Timothy McGee on the show.
[4] That’s Gibbs. Mark Harmon, on the other hand, has been married for a long time to Pam Dawber, whom you will remember, if you are old enough, as “Mindy,” who starred with Robin Williams on Mork and Mindy.
[5] Mark Harmon, who plays Gibbs, does, in fact, make furniture using hand tools. That explains why Agent Gibbs seems to know what he is doing
[6] He also has a firm-but-fair collegial relationship with other male members of the team. More “coach-like” than godlike.
[7] In, I should say, a show stocked with redheads. Some of the redheads have been his boss. Some have been flings. One I can think of has been both.