Selma has been nominated for an Academy Award as the best film of the year. One of the things that means is that it is going to get talked about a lot. Since it is about race relations in the United States, it is going to get argued about a lot. For those of us who “remember” Selma, in the removed sense of watching it on television, it will evoke the ransacking of memories and the scratching of heads.

And it should. We live in the “docudrama era.” Is a movie like a document or it is like a drama? When we say it is “based on” a true story, does that mean it is true or does it mean that all the falsehoods it contains were added after the true story was written?

In a way, I am surprised that this is still so hard for us. In 1971, John Gardner wrote Grendel, an account of the familiar story of Beowulf, told from “the other side.” Fans of Beowulf did not rise up shouting that this story was false. Well, you say, but that was easier. No one was claiming that Beowulf is an actual historical event. Because it is a tale, one version is as good as another.

Is Selma a “tale?” Ava DuVernay, the director, puts it this way, “I wasn’t interested in making a white-savior movie.” Maureen Dowd was not charmed by DuVernay’s approach, as you can see here.

DuVernay’s point, I suppose, is that the story of Lyndon Johnson’s effect on the civil rights has been told as a “white savior story.” It may be that DuVernay thinks the white savior story isn’t true or maybe she is just tired of it. She could have written an article saying it wasn’t true or an editorial saying she is tired of that story, but she’s a movie maker, so she made a movie.

And what does the movie “say?” Obviously, it says quite a few things. It says that there was discord among the black activists about the best way to proceed. It says that Lyndon Johnson had an agenda of his own and wanted Dr. King to be a part of it. It says that Jesse 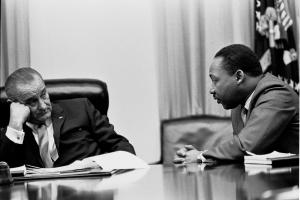 Jackson was no part of the activities around Selma. It says that Dr. King was not unfaithful to his wife. The most central statement it makes is that the civil rights movement was about black people, not white people.

Here’s what that means. As the plans for the movie go forward, everything that shifts the focus from the intentions and feelings and actions of the black civil rights marchers in Alabama just has to go. If Gandhi had marched with them to Birmingham, DuVernay would not have covered it. It’s a question of where to point the camera. Selma is where the action is; Washington is a reluctant child who needs to be brought into line. 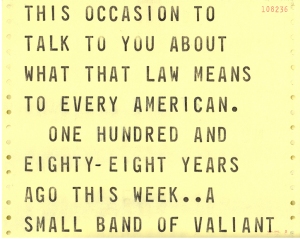 And just as there is only so much camera time, so there is only so much credit. The credit you award over there, you cannot award again over here. If President Johnson had a determination to pass a voting rights bill, that will need to be obscured so that Dr. King’s struggle—inside himself and outside—can be what causes the events we see. No congressional sentiments favorable to civil rights are shown. Support, even distant support, takes the credit away from the black marchers who faced mounted troops and unruly mobs.

That’s what you have to do to tell a story.

Now…is it a true story? I’m going to say No, but I want to stop first and trash the notion of “true stories.” All stories gain coherence by featuring some things, including other things, and excluding yet other things. If “true” meant that all the facts were included, we can easily see that no story is “true” in that sense.

That brings us to “our story” and “your story.” This is the cowboys and Indians problem. The settlers were peacefully farming their land when vicious savages murdered all of them except the one child who got away to tell the whole pathetic story. The Indians were peacefully living in their way on their land when soldiers came in and killed a lot of them and forced the rest into an arid ghetto. In Stan Freberg’s marvelous retelling of Christopher Columbus landing in the new world, he “discovers” the Indians living there.

The Indians “discover” Columbus’s crew tooling around on the beach. As the chief says, “Is all how you look at it.”

Selma is “their story.” It proceeds as it must if it is to be their story. What I experienced in the 1960s as “what was happening” was “my story” and it has been told many many times.

So what’s the problem? Is there still a problem?

Yes there is. For me, there is. If you could add up all the stories—everything adds together and nothing is subtracted—you could just pile one story on another. I did that recently with a story about a girl I called Allison, who was a Goth and also a cheerleader and also an honor student. As a cheerleader, she had long fingernails painted in the school colors. As a Goth, she chewed her fingernails short and ragged. It doesn’t work. Someone will want to know what the fingernails “really looked like.”

We learn in Selma that President Johnson unleashed J. Edgar Hoover to wiretap Dr. King. Here’s Bill Moyers on the portrayal of that event.

As for Lyndon B. Johnson: There’s one egregious and outrageous portrayal that is the worst kind of creative license suggesting the very opposite of the truth, in this case, that the president was behind J. Edgar Hoover’s sending the ‘sex tape’ to Coretta King. Some of our most scrupulous historians have denounced that one. And even if you want to think of Lyndon B. Johnson as vile enough to want to do that, he was way, way too smart to hand Hoover the means of blackmailing him.

So…in DuVernay’s story, is it OK to portray Lyndon Johnson as an obstacle that must be overcome but not OK to say that he committed a deplorable act that he did not commit? We learn things about President Johnson that, according to Moyers, (that’s a very young Bill Moyers with LBJ) many careful historians have determined not to be true. Is this the price to be paid for DuVernay’s story to be told? If it is a necessary price, is it too high?

I was troubled by DuVernay’s depiction of President Johnson’s speech on behalf of the Voting Rights Act. Lyndon Johnson was one of the worst orators ever to hold the office of President of the United States, but I thought at the time that this might have been the best speech he ever gave. He was equal parts determined, frustrated, angry, and powerful. He dominated a packed House chamber full of people who looked and sounded as if they knew what was going on. It was powerful!

DuVernay has the speech in the Senate chamber, not the House. It is not a crowded room. The hearers are not enthusiastic. Johnson himself is clearly trying to seem determined, but we can tell that he is not. You can also see why it chafes Bill Moyers.

Johnson was more animated and passionate than I have ever seen him, and I was standing very near him, off to the right. The nation was electrified.

In all these things, she is “wrong” in the sense of being inaccurate. And she is “right” is pushing to the background the actions of a white man that would eclipse the actions of a black man. She is telling her story.

I feel the frustration of her telling a story that doesn’t line up with my own experience. In a more removed sense, I feel the built up anger that shows through her “white-savior movie” comment. I think there is real merit in having our various frustrations aired—hers and mine—in bars and coffee shops all over the country. I think we will all be better for that conversation