John Dickerson asked on the Slate Political Gabfest recently what should be done about all the floppers.  I had never heard that expression applied to politics, but I understood what he meant right away.

He had a political application in mind, but the picture he wanted us to see was this one.  In 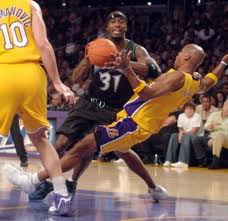 basketball, the rules specify that when the ball handler is going for the basket, the defender cannot simply get in his road.[1]  You can “be” in the road, but you have to get there first.  If you are there first and the ball handler runs into you—it has to be a significant, not just an incidental contact—the dribbler has committed a charging foul.

“Flopping” is making incidental contact look as if it were significant contact.  As I go by you, my shoulder brushes yours, just barely, but you fall backward dramatically, waving your arms, trying to get the referee to call me for charging.  That’s “flopping.”

So in politics, my opponent brushes my shoulder in passing, and I begin to scream and shout.  The idea is to persuade the voters (that’s the referee in most political conflicts) that there was a “significant” contact.  Let’s take Mitt Romney’s famous line, “I don’t care about the poor.”  What he actually said was:

That wasn’t an insensitive thing to say, but it was a vulnerable statement.  Romney made what any ref would call “incidental contact” with the interviewer, CNN’s Soledad O’Brien, and she went flailing backward as if he had hit her with a baseball bat.  She said:

“I think there are lots of very poor Americans who are struggling who would say, ‘That sounds odd.’”

Soledad O’Brien flopped.  And Mitt Romney was called for the foul.  Does it matter?

Well…yes, it does.  Let’s go back to basketball for a moment.  The game is supposed to be about one team trying to put the ball in the basket and the other team trying to prevent them.  If I am the offensive team and I dribble better and pass better and set picks better and cut for the basket better, eventually I am going to get a clear shot at the basket—with all that, probably an easy shot at the basket.  Your job as the defensive team is to impede my dribble, challenge my passes, get around my picks, and stay with the cutter, so that no matter what you do, you will not get a clear shot at the basket.  Seeing to good teams trying to do things like that is really exciting.  I call that basketball.  Here is Tim Duncan with the standard “Who me?” pose.

There is an alternative, however.  Rather than your trying to get to the basket, you can try to make the ref think the defensive player impeded you path to the basket.  This is all drama; it is all showmanship.  I play defense for the purpose of persuading the ref that you committed a charging foul.  You play offense for the purpose of persuading the ref I committed a blocking foul.  This is not basketball; it is theater.  The more the game is rigged for dramatic effect, the less it is like basketball and the more it is like a bad soap opera. [Note: not all flopping is bad.  Below is Dick Fosbury of Oregon State, who perfected flopping before it was even a bright idea in basketball.]

It works the same way in politics.  What Dickerson meant was that there is a way to play

politics.  I try to show that my party is more reliable than yours; that my issue positions are more likely to work than yours; that I am a more appealing, more likeable person than you.  You say that my party is out of step with the American people, that my positions will lead to some dire outcome; that I, myself, have done or said things I should be ashamed of—Mitt Romney “not caring about the poor” is a good example of that last one.  And while you are trying to show that my issue positions are bad, I am trying to show that yours are worse.  We are playing offense and defense simultaneously.

But what Dickerson actual said is that there is a lot of flopping going on.  The whole game of politics is skewed as candidates try to pretend that something racist or sexist or ageist has been said and that the candidate who said it should a) apologize to anyone who might have been offended, b) withdraw from the race, and c) if necessary, sacrifice his or her firstborn child.  The more the political debate is rigged for dramatic effect, the less it is like civic discourse and the more it is like a bad soap opera.

President Obama wants the poor to get good medical care as they do in the social democracies of Europe.  President Obama is a socialist.  He is un-American.

Senator McCain wants to send a message to Iran: “You know that old Beach Boys song,” he quipped, “Bomb Iran? Bomb bomb bomb, bomb bomb Iran.”  Sen. McCain is a warmonger.  He would involve U. S. troops all over the globe at horrific personal and financial cost.

People who like their politics dirty ask, “What’s the harm in having a little fun?”  I say it depends on what you have to give up to have that fun.  When candidates are punished for every expression that could be misunderstood, they will resort of completely opaque “talking points.”  When candidates’ private lives are ransacked for unguarded comments to friends or neighbors, they will make sure no part of their private lives is accessible to anyone outside the clique.

Flopping is an increasingly common political strategy.  I say it’s ugly.  I don’t want to watch it. And it takes the place of issues oriented discussion without which we will continue to drift.