Two Cheers for the Community of Loiterers

Here is today’s dilemma.  I don’t really know what to do about it.  That’s why it gets only two cheers.

THERE’S an old Italian saying, “A tavola non si invecchia,” which means: At the table, you don’t grow old.” All of us, of whatever age, need to socialize in public places to feel connected and alive. That sense of shared conviviality was notably absent recently when police officers removed loiterers, many of them elderly Korean-Americans, from a McDonald’s restaurant in Queens.

That’s from Stacy Torres’s column in the New York Times for January 22, which you can check out here.  Right away, you can see that “shared conviviality” and “loiterers” point in different directions.  This is not a logical problem; this is a policy problem.  That is, there is no question that 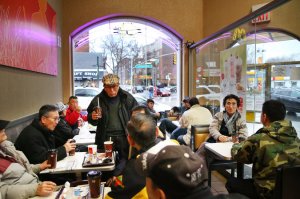 loiterers can experience and enjoy conviviality; there is only the question of whose table is being used and whether the people whose table it is can afford to have it used by loiterers.

This is one of those odd discussions—odder than we might wish—where one piece of the argument takes place in the front room and the other piece in the back room.  Here’s the back room piece.  It costs Starbucks $2.31 per table per hour to provide a table (I’m just making up the numbers).  If Starbucks can make $2.31 per table per hour, it can heat the building, employ the staff and make a profit.  There is no shortage of potential locations for Starbucks stores—although in New York City last fall, Bette and I could sometimes see three Starbucks stores from where we stood–so the question for Starbucks is whether they want to have a store here; here in this particular place.  Making less than $2.31 sends a No message to management; making more than $2.31 sends a Yes message.

In the front room, the conversation is entirely different.  Here’s a letter from a reader responding to the article.

Older patrons may test the limits of public dawdling, but this phenomenon — call it loitering or community building — is essential for the survival of many people 65 and older. According to the last census, seniors constitute 12 percent of New York City’s population. Many of them are single, sometimes far from family, and have lived in their localities for decades, their entire lives even. For the past four years, I have studied how neighborhood public places help older Manhattan residents avoid isolation and develop social ties that offer support, ranging from a sympathetic ear to a small emergency loan.

Let’s say that the facts here are all true and that the point  they raise is important.  In the front room, we talk about how important it is for the elderly to have access to a place where crucially necessary services can be received.  In the back room, we talk about whether a Starbucks at this location should be closed down on the grounds that it is losing money.  People in the front room are showing a lot of compassion toward old people.  People in the back room are looking at profitability.  What can we do to join these two conversations?

We could ask someone to write a piece about it and stick it on a blog, I guess.

I don’t think we ought to be asking for profit companies to forego profits so they can provide much-needed social services.  That doesn’t make any sense to me.  I would be willing, from an ethical, not an economic, standpoint to ask a company to make less profit in order to provide these services.  How much less?  I don’t know: some.

Here are some lines that define the field of play for this issue.  Just as customers are free to go to 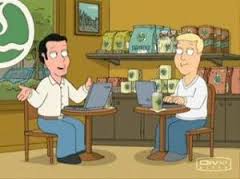 one store or another, stores are free to go to one location or another.  Just as customers are free to take action on their own behalf—sit ins, slow downs, spilling, pickets—so stores are free to take action.  They could raise the prices or change the seating or adjust the store hours.  It’s all very symmetrical.  But Starbucks could also call the police and there’s nothing symmetrical about that.  The law is on Starbucks side, so far as the rights of property and the requirements of public safety are concerned and that means, when push comes to shove, that the police are on Starbucks side as well.

The contest we need to have will take place on that field of play.  But then…don’t we have arrangements for social services that are crucially necessary but that don’t pay for themselves?  Aren’t there public parks?  Can’t you engage in “community building” in the parks?  Sure you can when the weather allows it, but what about winter time?  Heated parks?  You could call them malls, if that would help.  Some of the articles talked about Café Plus, which is being tried in some cities.  Take a look.

I honestly don’t see the merit of asking businesses that are doing what they are doing so they can make money to do things that lose them money.  That may be simpleminded, but that’s how I see it.  I would love to see a big time social democracy, along the lines of the democracies of Europe, established in the U.S.  That’s a preference, not a prediction.  That active political classes in the U.S. want no part of a safety net that actually works and that is paid for with general revenues by the national government.  On the other hand, Americans are famous for hybrid projects of various kinds.  I could see the government buying some capacity from a Starbucks or a McDonalds or a Burger King.  This is money they would get as long as they continue to serve as de facto gathering places for classes of people who would not otherwise have a place of their choosing.[1]  I have no idea how the money would work out, but the principle would be the same as buying social services from “faith-based” organizations or from public schools.[2]

It would represent an ill-defined path between two clearly rejected options.  Sound just like us, doesn’t it?

[1] Old people do not seem to congregate in age-segregated senior centers when they have a choice.

[2] A very high profile Oregon educator used to campaign for adding more social services to the public schools on the basis of a principle he called “habeas kiddus.”  You have the kids, he said, so you get the services they need.