I remember when the Democratic Party was the champion of “the poor.”  I always thought it was pretty gutsy to champion a set of people based on their economic status—especially the class of people that votes at lower levels than any other category of voter. After that came “the marginalized.”  I knew they meant the same people, but this word had that magic –ized ending on it which means that something has been done to these people.  They were victims.  If, after all, these people have been marginalized, then there are marginalizers—the bad guys—who can be vilified and  perhaps even defeated.

For several election cycles now, the Democrats have been the champions of “the middle class.”  I never really believed that.  I always thought that it was just a new and more respectable name for the downtrodden, the traditional Democratic icon.  I’m sure the idea of choosing “the middle class” as the favored class has something to do with the fact that the vast majority of Americans think they are part of that class.  Take a look at this chart.

A part of the larger political message is that American economic well-being rests on having access to a middle class that can afford to make purchases.  Take a look at that sentence.  Read it twice. Remember where you saw it.  We are going to come back to it shortly.

Robert Reich, in his recent book Aftershock: The Next Economy and America’s Future, begins with the insight of Henry Ford.  Ford paid his workers outrageously well.  The Wall Street Journal called Ford’s pay scale “an economic crime.”  Ford’s idea was that if he paid his workers enough to buy Ford cars, he would sell a lot of Ford cars, and so he did.

Reich characterizes the thirty years from 1947—1975 as “The Great Prosperity.”  Everything worked.  Productivity grew, wages and salaries grew, safety net protections grew, unions were strong, increasing numbers were attending college.  Then we started doing things wrong and for the next thirty years—which included Reich’s turn as Secretary of Labor—all those advances began to retreat.  Here is his summary:

To summarize: The fundamental problem is that Americans no longer have the purchasing power to buy what the U. S. economy is capable of producing. ..What’s broken is the basic bargain linking pay to production.  The solution is to remake the bargain.

And, on the next page:

It is true beyond question that American companies cannot thrive unless they can sell their products at a profit.  But nothing in that scheme requires that these products be sold to American consumers.  Here’s that sentence I asked you to remember.

A part of the larger political message is that American economic well-being rests on having access to a middle class that can afford to make purchases.

Did you notice that nothing in that sentence has anything to do with access to an AMERICAN middle class? I didn’t notice it myself until I wrote it and then read it several times.  In other words, all Reich’s solution requires is that there be a middle class somewhere that is big enough—has the aggregate purchasing capacity—to keep American businesses strong.  Henry Ford’s solution—paying his workers enough to buy a car—worked just fine for Ford, but now we can sell Fords anywhere in the world that people have enough money to buy them.  Ford doesn’t really need to pay its workers “enough” anymore.

What Ford really needs is “a global middle class.”  And is there such a thing?  Sure.  Here are a couple of things I ran across.  We have the 27th largest middle class in the world if you measure median wealth per adult.  I got that from Les Leopold in the Business Section of HuffPost.  Median wealth is just  “the amount of wealth accumulated by the person precisely in the middle of the wealth distribution — fifty percent of the adult population has more wealth, while fifty percent has less.”  And, as Leopold observes, you can’t get much more middle than that. 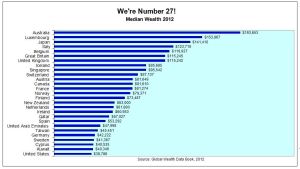 It’s hard to see the number values in this chart, but you should be able to see that the United States is the last one on the list.  Questions can be asked about the size of each of these middle classes and about whether “median wealth per adult” is the best measure of potential aggregate demand.

Here’s what can’t be asked any more.  Where will American businesses find buyers for their products after the American middle class has wrung itself dry?  The answer is, “Everywhere else.”  There is no advantage to an American manufacturer or service provider to sell to American customers.  People who have money to spend are “customers.”

The American middle class really doesn’t have money to spend.  Wages have gone down, measured by purchasing power, since 1972.  Continuously down.  Converting families with one bread-winner into families with two bread-winners helped for a while, but falling wages wiped that out as an economic solution.  Vastly increasing credit card debt helped for a while, but eventually those have to be paid off.  Borrowing on the value of the house helped until the housing market tanked and millions of people were left with nothing.  The American middle class really doesn’t have enough money to sustain the consumer spending part of the economy and that’s a crucially necessary part of that economy.

So the Ford solution, which Reich is counting on, doesn’t really help us anymore.  American business can be prosperous so long as they have prosperous customers and there is no reason why those customers need to be Americans.  The American middle class can continue to shrivel—the protectorship of the Democratic Party notwithstanding—and American businesses can continue to prosper.

It’s hard to imagine a stable democratic country where the two large classes are the wage-poor and the profit-rich.  We’ve always thought of ourselves as essentially a middle class country.  Thomas Jefferson said that is all that would save democracy in the United States over the long run.

We’ve always thought that was good news, but maybe it isn’t.

1 Response to The Growing Middle Class