Do You Understand What You Are Reading?

In the family and the community and the culture in which I was raised, knowing what the Bible

said was thought to be a good thing.  You could learn a lot just by reading it by yourself, of course.  Who was Tamar’s father-in-law?  Um…Judah.  But there were also groups who “studied” the Bible together and if you are going to pursue an activity in a group, there must be a common notion of what we are doing.  You can’t do it together if you don’t have some common notion of what you are doing.  Here is Gabriel, by the way.  Look at the pointing finger.

What were we doing in these groups was looking at the passage under consideration and trying to decide what it meant.  That seemed so unremarkable at the time.  We might take a passage like Matthew 25, here in the King James Version of my youth.

34 Then shall the King say unto them on his right hand, Come, ye blessed of my Father, inherit the kingdom prepared for you from the foundation of the world: 35 For I was an hungred, and ye gave me meat: I was thirsty, and ye gave me drink: I was a stranger, and ye took me in: 36 Naked, and ye clothed me: I was sick, and ye visited me: I was in prison, and ye came unto me.37 Then shall the righteous answer him, saying, Lord, when saw we thee an hungred, and fed thee? or thirsty, and gave thee drink? 38 When saw we thee a stranger, and took thee in? or naked, and clothed thee? 39 Or when saw we thee sick, or in prison, and came unto thee? 40 And the King shall answer and say unto them, Verily I say unto you, Inasmuch as ye have done it unto one of the least of these my brethren, ye have done it unto me. 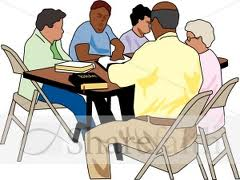 We could have talked about the justice of God.  We could have let our imaginations run about just who “the least of these” were.  We certainly wouldn’t have paused to add “or my sisters” after “these my brethren,” although that is a perfectly respectable way to translate it if the question had come up.  We might even have raised the question of whether it is really “the least of these” who is highlighted or is it “even the least of my brothers.”  It is the brothers (and sisters) we are talking about and the least among these are being given particular focus.  Is the passage about the disciples of Jesus, in other words?

I have nothing against conversations of that kind.  There are passages in the Bible where that kind of discussion is as good as any other kind.  Furthermore, it is a very democratic and forgiving group process.  If “the meaning of the text” is right there on the page, in English, presupposing our own cultural values rather than those of the time when it occurred, and I understand it one way and you another, the discussion goes on.  I value your contribution and you value my contribution and we have punch and cookies afterward.

Then there are passages where that kind of understanding is simply not adequate.  Let’s consider one so we can explore just what would be required to understand such a passage.   Here’s one from Luke 1, shifting now to the New Jerusalem Bible, my current favorite.

18 Zechariah said to the angel, ‘How can I know this? * I am an old man and my wife is getting on in years.’ 19 The angel replied, ‘I am Gabriel, who stand in God’s presence, and I have been sent to speak to you and bring you this good news. 20 Look! Since you did not believe my words, which will come true at their appointed time, you will be silenced and have no power of speech until this has happened.’

How will the group I have been describing and which I have often been a part of, understand this text?  I have always understood that Gabriel is chastising Zechariah for his unbelief.  That never seemed quite fair to me.  An angel appears to me in the middle of a work day and says my wife, who has never been able to get pregnant—we tried everything!—is going to have a baby.  Now, when even menopause is a distant memory.  I say, “How in the world is that going to happen?”  And he punishes me.  I thought it was a pretty good question.

It gets worse if anyone in the group happens to know that Abraham asked the same question exactly—word for word—without getting hammered for it and Mary asked the same question as well, of this same angel, and got a very informative answer to her question.  Puzzling, of course, but an answer.  There are a lot of ways the discussion in my group can go after that; all of them bad, so far as understanding the passage is concerned.

Here’s another approach to that passage.  It has a lot of drawbacks.  For one thing, it is scholarly.  We are never going to have a church full of biblical scholars or a church open to consulting biblical scholars.  Why?  Remember what I said about how bracing this kind of discussion was—democratic and forgiving, I called it?  The scholarly approach isn’t like that.  It features the authority of scholarship.  If there is more than one scholar, I probably includes academic competition as well.

But it has advantages, too.  For one thing, if provides an answer to the question of why Gabriel was so snotty to that dazzled old man.  Here’s what Raymond Brown says, “He is struck dumb.  That seems harsh, but this is not told for sentiment.”

Matthew is trying, Brown says, to remind his hearers[1] of Gabriel’s appearance to the prophet Daniel, which was Gabriel’s only previous appearance in the Bible.  Here’s how that encounter went, as Daniel himself describes it in Daniel, Chapter 9:

14 “Now I have come to explain the vision to you. I will tell you what will happen to your people. The vision shows what will take place in days to come.” 15 While he was telling me those things, I bowed with my face toward the ground. I wasn’t able to speak.

Gabriel gave to Daniel a vision of the last times and Daniel was struck dumb by the vision.  He wasn’t being punished.  He was being overwhelmed.  And Brown says that Luke introduces this little plot twist into the annunciation story to remind the readers of the power, the gravity, the significance of the pronouncement.  The alternative way of approaching it, the way I described as my group’s approach, is dismissed by the line, “…this is not told for sentiment.”  This one line, in fact, dismisses all the kinds of understandings available to the group.  We presupposed that this story was being told for “sentiment,” although that is not what we would have called it.

Let’s just say that Brown is right about Luke’s editorial intent.  Where does that leave us?  As you would expect, there are some good effects and some bad effects.  The most immediate good effect, the one I experienced most directly when I heard Brown’s line—“…this is not told for sentiment”—is the relief of letting go of Gabriel’s snappishness.  Why Gabriel said what he said now makes sense and it has nothing to do with Zechariah.

The second implication is that a group consideration of passages like this are doomed to failure if “understanding the passage” is what the group is about.  No one in the group is going to know about Gabriel’s previous appearance.  No one will think of Luke’s artistry in evoking Daniel’s vision of the last times as he prepares us for understanding the decisive invasion of human history that begins (again) with the annunciation of the birth of John the Baptist.  No one will be thinking about Luke at all because it will not occur to anyone that the best understanding of this passage comes from the use the writer is making of it.

That means that the easy collegiality that was made possible in the Bible study group (by the presupposition that the meaning of the text was right there in the text) goes away.  That’s a big loss for me.  I really liked being part of a group working together on that tast.  People who look back at their participation in such groups with anger think of pictures like this one.  I don’t. Those old meetings are replaced by having a textual expert handy and by relying on the authority of the expert rather than our own back-of-the-envelope calculations.

Those are the gains and the losses that come to my mind first.  For myself, I don’t think I have any choice any more.  When I read about Luke’s intention to evoke Daniel, something snaps in place and all of a sudden I feel that I am seeing the passage clearly—very often, clearly for the first time.  And there is an emotional excitement about it.  I don’t want to give that up either.  I don’t think there is any going back for me.

That means that no Bible study group I have ever been part of is going to work for me anymore.  Maybe there’s a group somewhere.  I could teach a group like that myself, if the group would allow “teaching” to be relaying to them the understandings I found in my studies among Brown and his fellow scholars.  That doesn’t sound very likely to me, especially when there are so many scholars who might be chosen.

So I choose to read my books and to listen to my CDs and to have the conversations I can have based on what I have learned.  I have some friends who will be glad to be a part of this enterprise, although none of them lives in Portland, Oregon.  I have a blog, which serves to begin conversations with this far-flung set of friends.  That’s pretty good.

But however good or bad it is, I’m sure I can’t go back to the group approach I once knew.  Always, there are two questions.  The second one, “What does this passage mean for the way I understand my own life and the challenges of my own discipleship?” is going to be the same in either setting.  The first one, “What does this passage mean to me?” has been decisively replaced by “What is Luke trying to say by crafting this text as he does?”

[1] Father Raymond E. Brown tries, especially in his lectures, to remind us that most of the people who came in contact with Matthew’s text in the first several centuries were hearing it read, rather than reading it themselves.  There weren’t many copies of these texts and most people couldn’t read anyway.  This consideration of Luke’s use of the vision appears in his book, The Birth of the Messiah and in a set of lectures with the same title.