He Said/She Said: the Two Narratives of the Birth of Jesus

I have known for several decades that we have two accounts of the birth of Jesus.  It had not occurred to me until yesterday that one of them (Matthew) has Joseph in the foreground and Mary in the background, while the other (Luke) has Mary in the foreground and Joseph in the background.  If the principal characters narrated these stories (they don’t), we could call those versions “he said” and “she said.”

The next two paragraphs record what the two traditions actually say about Joseph and Mary.  You can skip them if you like and then, if the conclusions that follow seem puzzling, you can come back and look at them.  Or, if worst comes to worst, you can read the first two chapters of Matthew and Luke.

The four parts of Matthew that bear directly on Joseph and Mary are these: a) Joseph is told to accept Mary although she is pregnant with a child that is not his and he does what he is asked to do, b) he names the baby Jesus, as he is instructed, c)  Joseph is warned to flee immediately to Egypt, taking his wife and son, and he does that, as we see here 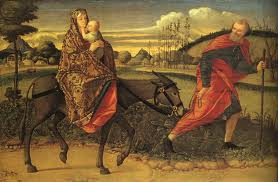 d) he took the family back to Israel, when he was told to do so, but not back to their home in Bethlehem, because he was warned about the Herodian ruler, and decided that Nazareth was far enough away that his family would be safe.

The nine parts of Luke that bear directly on Joseph and Mary are these: a) Mary is visited by the angel Gabriel and told that even though she is a virgin, she will conceive and bear Israel’s Messiah, b) Mary responds with a question—How can this be?—and then with willing acceptance,  c) Gabriel also told Mary that her cousin Elizabeth, aged and barren, would have a son and Mary went to visit her as quickly as she could, d) Elizabeth greets her as “the mother of my Lord” and Mary responds with an extended canticle, the Magnificat,  e) she leaves their home in Nazareth with her husband, Joseph, and goes to Bethlehem to register in Augustus’s census and while there, delivers her baby in a stable, f) she keeps carefully in her heart (Joseph did not) the words of the shepherds who came to see her baby and who told of a choir of angels that had appeared to them, g) on the eighth day, Joseph and Mary had their baby 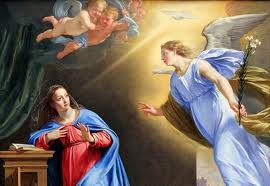 circumcised and Mary named him Jesus, h) while they were in Jerusalem to offer their son to God (because he was a first-born), they heard a canticle (the Nunc Dimittis) from the aged Simeon, who said to Mary (not to Joseph) that her son would be great and also a cause of division, from which she herself would not be spared, i) she reproved the preadolescent Jesus (Joseph did not) for not staying with the family as he should have when they left Jerusalem for home.

Matthew’s story (the “he said” version):  Joseph’s receptivity to God’s voice and his prompt obedience are featured in Matthew.  He names the child Jesus. He takes Mary, he flees to Egypt, he returns to Israel.  He also makes a prudent calculation about how far the Herodian ruler’s power would extend and settles his family well outside his kingdom.  He doesn’t say a word to God or to Mary or to anyone else.  He just does what he is told.

Luke’s story (the “she said” version):  Mary has an actual conversation with the angel Gabriel and decides on her own to visit Elizabeth.  While there, she delivers a substantial speech.  She goes with Joseph to Bethlehem and delivers her child there.  She names the child Jesus. Several participants have special messages for her and she hears them and thinks about them. She and Joseph act as parents in circumcising him, in redeeming him at the Temple.[1]  Later she rebukes her pre-adolescent son for his carelessness and is rebuked by the son in turn.

Note that there is almost nothing about Mary in Matthew’s account.  She is the object of Joseph’s benevolence and accompanies her husband to all the places he is told to go.  Similarly, there is almost nothing about Joseph in Luke’s account.  He is named as Mary’s fiancée[2] and as the one who is required to go to Bethlehem to register and as the person who was with Mary in the stable, and later, at the temple.  Nothing else.  Other references are “they” and “the child’s father and mother” and finally, “his parents.”  In Luke, Joseph decides nothing, not even the child’s name, has no dreams, and  receives no guidance.  He is a bystander.

Matthew’s birth narrative is about Joseph, in short, and Luke’s is about Mary.  There is no need to be confused by the fact that the side stories are different.  Matthew, for instance, adds gentile academics (Wise Men) to his account because he wants an early gentile recognition of the status of the new “King of the Jews.”  Luke adds the shepherds because he cares deeply about the poor and wants them, lowly sheep herders, in this case, to get a special invitation to come to Bethlehem to see an apparently insignificant child who was born in a barn.[3]  These additions make each birth narrative a little more complicated, but they don’t change the focal characters.

Matthew gives us the compassionate, visionary, and action-oriented husband.  Luke gives us the divinely chosen virgin mother and her male caregiver.  Each story has a focus and a strong narrative integrity.  The story I heard for the first fifty or so years of my life, “the Christmas story,” has neither one focus nor two; and no narrative integrity at all.

Does that seem harsh?  OK, you tell me where the tension is in a story where an angel tells Mary about her pregnancy and then tells Joseph the same thing.  It is “their secret” now, since both know the same thing?  No, Matthew has it better, where Joseph is told and Mary is not.  And Luke has it better as well, where Mary is told and Joseph is not.

W. H. Auden gets that in the way he represents Joseph’s confrontation with Gabriel in his poem, “For the Time Being.”

[1] As a first-born male, Jesus “belongs to God” and must be redeemed so he can live at home with his parents.

[2] I think fiancée is the best I can do.  According to the customs of that time, Joseph and Mary were “man and wife” for a period of time before they began living together.  It’s hard to find a way to say that in English.

[3] Whenever I get to this reference, I am reminded that the literal meaning of the English word bastard is “born in a barn.”  The Latin bastum means “pack saddle.”  The –ard suffix is a standard pejorative suffix, seen also in sluggard and drunkard.  So a “pack-saddle child” is born, not in the marriage bed, but in the barn where the saddles are kept.