How do you go about “hearing God’s voice?”  I’m not sure, to tell you the truth.  It isn’t anything I’ve ever been good at.  It may be that I just don’t have the basic capacity.  Or it may be that I have just not been willing to do the necessary work.  In any case, it is what I want to think about today and you are invited.

I’ve been thinking about Samuel, the last judge and first king-maker of ancient Israel.  He anointed David to be king, which was a rather dicey thing to do, since Saul was king of Israel at the time and did not have a reputation for playing nicely with others. God told Samuel to go to the house of Jesse and to anoint one of his sons as king.[1]  You can see all this yourself in I Samuel, chapter 16.  It sounds a little improbable and you might think I am making it up.

First up was Jesse’s son Eliab.  Samuel thought Eliab looked like the kind of man God would choose to be king, but God said No.  Next up to bat was Abinidab.  “Him?” said Samuel.  “Nope,” said God.  Then Shammah.  Nope.  Then four more sons whose names are not given.  Then they fetched David, the youngest, from the fields and God said, “Him.  He’s the one I want.  Anoint him to be king.”

This all sounds fairy-tale-ish to me and I have written it to emphasize that sense.  But here is a fact: Samuel did not choose the son that looked right to him.  He waited until he heard God’s voice and did what that voice told him to do.

Parenthesis 1  If you want a very emotionally compelling experience of what it can be like to hear God’s voice and do what it tells you to do, I recommend a scene from the movie, “Ghost.”  Sam Wheat (Patrick Swayze) is killed early in the movie.  He is now “the ghost” of the title.  He devises a way to communicate with his fiancée, Molly Jensen (Demi Moore), and tells her to go to the police and tell them who killed him and why.  The communication comes to Molly through a medium, Oda Mae Brown (Whoopi Goldberg), who has a substantial police record.  Molly goes to the police as Sam has asked her.  She says what Sam has told her to say.   She accepts the ridicule she gets from the police for asking them to act on information she got from a ghost by means of a medium and leaves humiliated and distraught.  As viewers, we know that everything she told them is true, but that doesn’t help her and if wouldn’t have helped Samuel.  If you watch this clip, you will see that it wouldn’t have helped you, either.

So what did Samuel have to do to “hear God’s voice?”  First, he had to know that the voice he was hearing was not his own voice.  Everything in Samuel said, when he saw Eliab, “Yes.  That’s the one.  I have a sense about things like this.”  He heard that voice, but, remarkably, he recognized it as his own; not God’s.  Samuel’s my hero.

Parenthesis 2  Another experience you might want to try on is the experience of the baseball scouts in “Moneyball.”  They keep proposing players who either won’t work out for their team or that the team can’t afford.  And they keep doing it because their nominees meet their own criteria.  They are hearing their own voices and are being completely seduced those voices.  They know what the team needs, but they can’t bring themselves to want that.  These scouts would have chosen Eliab, only to watch him drift down through the minor leagues.

How did Samuel get so good at “hearing the voice of God?”  We don’t really know, of course, and that isn’t the kind of question the historical accounts of the Old Testament show any interest in.  I’m interested, though, and here’s my account.

Go back now to I Samuel, chapter 3.  Samuel is a little boy, serving Eli, the 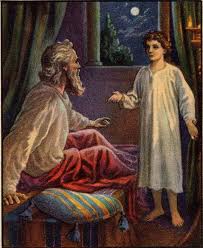 judge of Israel.  It had been a long time since anyone had heard from God.  So it’s 1:00 a.m. and Samuel is sound asleep and hears a voice calling his name.  “Rats!” says Samuel, “And I was sleeping so well. Now I’ve got to get up and go see what Eli wants.”  So he gets up and runs to Eli, who says he did not call Samuel and sends him back to bed.

The same thing happens at 3:00 a.m. and Samuel’s patience is wearing thin.  Maybe I didn’t hear him this time.  Maybe he will forget again that he has called me already—twice.  He didn’t do any of those things.  He got up and ran to Eli again.  This time, Eli understood what was going on.  He understood that God was speaking to Samuel.  He was not, you will notice, speaking to Eli and Eli needed to find some way to be OK with that.  “It is God speaking to you, Samuel,” said Eli.  “The next time, just say ‘Is there something you want to tell me’?”

Parenthesis 3  In our time, people have come to understand God as a cuddly sort of being.  We wonder why the first thing the angels always say is, “Don’t be afraid.”  The God who is the central character of these stories is not at all cuddly, which is why I chose, as Samuel’s question a line from “The Sixth Sense.”  Cole Sear (Haley Joel Osment) is being terrorized by a ghost who has come into his bedroom.  It has gotten cold in the room as it always gets when a dead person is there.  Fighting for control of himself, he approaches the ghost, step by difficult step, and says what his counselor has told him to say.  Nearly overcome with terror, he manages to say to this dead person, “Is there something you want to tell me?”

It may have been something like that for Samuel.  We don’t really know.  It was not anything like a coronation.  It was dark and severe.  But still, he asked the question he had been told to ask and he got the answer that served as the foundation of the rest of his life.  This answer, and what he had to go through to hear it, still mattered to him when God sent him out of find a replacement for Saul.  That’s how Samuel knew that Eliab wasn’t God’s choice and that David was.

Samuel had learned to hear what he heard.  He did not deny it.  He did not pretend he had not heard it.  He did not disobey it.  He got up, over and over, and went to the bedside of the old man who kept on saying that he had not called.  In a word, Samuel practiced hearing the voice of God.  He got good at it.  He heard it even when it said things he didn’t want to hear.  He learned that God’s voice did not sound like his own voice. 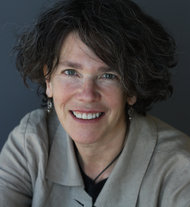 This has been swirling around in my mind since I started reading T. M. Luhrmann in the New York Times.  Here’s the whole article and here’s the clip that caught my attention:

The prayer warriors said that as they became immersed in prayer, their senses became more acute. Smells seemed richer, colors more vibrant. Their inner sensory worlds grew more vivid and more detailed, and their thoughts and images sometimes seemed as if they were external to the mind. Later, I was able to demonstrate experimentally that prayer practice did lead to more vivid inner images and more hallucination-like events.

It seems that you have to have a leaning in this direction, Luhrmann says, but beyond the residual “gift,” you have to do the work.  I suspect that I might not have the resident capacity, but I am quite sure that I have not done the work.

That means that when I report that “I have not heard God speaking to me,” I have several ways of accounting for that, several “attributional options,” as we say in my line of work.  God isn’t speaking.[2]  I don’t have the talent to hear God speaking.  I do have the talent, but I haven’t done the work necessary to distinguish “the voice of God” from my own preferences.  All those explanations work.  God had not spoken in Israel for a long time before He spoke to Samuel.  Samuel had the talent, the residual capacity, to hear God speaking.  But even for Samuel, he had to do the work that will always be necessary to distinguish “what God said to me” from “I’m not sure God says things” and “I can’t hear God’s whispering over the shouting of my own ego.”

We see Samuel first in the role of king-maker.  He is the one who understands what choices God is making.  But before that, we saw him as a dutiful little boy, getting up over and over to tend to an old man.  In this story, it was patience of the little boy that produced the anointing of a new king.

[1] The whole operation was covert.  God said to go to Jesse’s house.  Samuel objected that if Saul caught him at it, he would kill him.  God said not to worry and gave Samuel the precise lie to tell that would keep him from getting caught.  God instructed Samuel, in other words, to “bear false witness,” which is interesting, all things considered.

[2] I am leaving aside for the moment the question of whether there is a God to do the speaking.  Some say there is such a being; some say there is not.  No one, on either side, has produced anything that a serious scientist would call “evidence.”