“Next to our liberties, most dear” 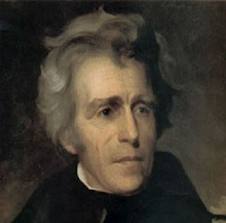 President, John C. Calhoun were attending a Jefferson Day dinner.  Jackson was a proponent of national dominance; Calhoun of the states’ right to “nullify” offensive federal legislation.  It came time for the toasts and this exchange occurred.

All that is historically true.  In my own picture, I have them smiling at each other from opposite ends of a long dinner table and looking each other in the eye.  I love the adroit way that Calhoun completely cuts the legs out from his first words by adding some very

gracious sounding additional words.  All while still smiling.  That’s what my own little mental movie looks like.

I got to thinking about this exchange when Speaker of the House John Boehner delivered the Weekly Republican Address.  I saw it on November 8.   President Obama responded.  I saw it live on November 9.  That’s when I thought of Jackson and Calhoun.

Here’s what Speaker Boehner said.  I don’t want to send our economy off the “so-called fiscal cliff.”  Some people say that the way to avoid that is to allow the top two [federal income] tax rates to rise.  That will, by one estimate destroy 700,000 American jobs because many of those hit by this tax increase are small business owners.

He also offered an alternative.  Rather than raising taxes on “the American people,” let’s close special interest loopholes and lower tax rates.  And while we’re at it, let’s “shore up” entitlement programs which are driving our country into massive debt.

Conclusion: “…if there was a mandate in this election, it was a mandate to work together to do what’s in the best interest of our country.”

Here’s President Obama’s response.  “At a time when our economy is still recovering from the Great Recession, our top priority has to be jobs and growth.”  That sound pretty good, doesn’t it? “That’s the focus of the plan I talked about during the campaign.  It’s a plan to reward businesses that create jobs here in America, and give people access to the education and training that those businesses are looking for.  It’s a plan to rebuild our infrastructure and keep us on the cutting edge of innovation and clean energy.  And it’s a plan to reduce our deficit in a balanced and responsible way.”

Notice how the alternatives the two speakers offer differ from each other.  For Boehner, closing special interest loopholes (unspecified), lowering tax rates, and reducing entitlement spending are the alternative to the fiscal cliff.  Obama goes with him as far as “jobs and growth,” but no further.  Everything else is recycled from his stump speech—incentives for domestic job creation, education and training, clean energy, and all that.  Then comes his “next to our liberties, most dear” touch: reducing the deficit in a balanced and responsible way.

“Balanced” means both raising revenues and cutting costs.  Just cutting costs won’t do it.  Nonspecific “loophole closures” won’t do it.  And when Obama talks about “raising revenue,” he means “allowing the top two rates to rise.”  That’s a quote from Boehner.  It’s what Boehner says will cause the loss of more than half a million jobs.  Obama calls it “balanced and responsible.”

He is more specific later.  “I refuse to accept any approach that isn’t balanced.  I will not ask students or seniors or middle-class families to pay down the entire deficit while people making over $250,000 aren’t asked to pay a dime more in taxes.”  Without question, it is the “allowing the top two rates to rise” that makes all this fair.  The alternative is taking it out of students, seniors, and middle-class families.”

We know how to do this.  “We did it when Bill Clinton was president.  And that’s the only way we can afford to invest in…the ingredients of a strong middle class and a strong economy.”  And—watch this—we should do that piece first because it is a piece we all agree on.  “Making sure that taxes don’t go up on the 98% of Americans making under $250,000” is the first thing Congress should do—because, you know, we all agree on it.  And that leaves only the part Boehner is concerned about still on the table.

Conclusion: “On Tuesday, we found out that a majority of Americans agree with my approach—and that includes Democrats, Independents, and Republicans.”  That sounds pretty good, you have to admit.  But Boehner pointed out the day before that the American people returned Republicans to their majority in the House because the Republicans could be trusted not to raise taxes.  So it looks like a majority in the presidential race said one thing and just a few inches further down the ballot, those same Americans said a different thing.  And the House is, Boehner remarked in the earlier speech, “the people’s house,” after all.

There is such apparent gentility in all this.  With the single exception of Obama’s line—“I refuse to accept any approach that isn’t balanced”—everything is sweetly collegial.  The people have asked us to work together and prevent this awful fiscal cliff and I think that’s what we ought to do, don’t you, Mr. President?  Absolutely, Mr. Speaker, “next to our deficits, most dear.”

[1] There was more, actually.  Calhoun said, ““The Union, next to our liberty, most dear. May we all remember that it can only be preserved by respecting the rights of the States and by distributing equally the benefits and burdens of the Union”