Remembering to Leave in Time

I want to raise the question here of how to decide when to go live in a Senior Center of some kind—I’m thinking of a nice generic name like Paleo Acres.  This could be a Paleo Acres; I guess I’d have to find out where it is first.

In preparation for this question, I would like to rule out some other questions.  The first question I am ruling out is whether to go live at Paleo Acres.  I’m sure there are good reasons for living in your own home for as long as you can, but Bette and I have decided not to do (for reasons that will become clearer in a moment), so I am ruling it out as a question that concerns me.

The second, a Frequently Heard Objection, (FHO) is: “I want to stay here as long as I/we can.”  That raises the question of what “can” means.  I don’t think there should be some Old Folks Agency (OFA), measuring whether old people ought to be allowed to stay in their homes and evicting them when the Agency feels some old couple doesn’t meet the criteria.[1]  On the other hand, I have seen old people who clutch their homes as if they were defending them from the Visigoths.  Their attitude is that there are a lot of things about being old that are really difficult, but there is no way we are going to let THEM throw us out.  Since THEM are bad guys, opposing them at all costs is the right thing to do.

Third, the question of “at all costs” introduces us to the question of just who will pay these costs.  I have seen families stretched to and beyond their limits to care for aging and home-bound parents who are “protecting their independence.”  This “independence” requires a thoroughgoing dependence upon a small army of caregivers (mostly family), accountants, nurses, therapists, and maids, but none of those people are THEM so we are still “independent.”  Putting the family through the wringer like that does not seem to me an act a loving parent would choose.

Fourth, there is the matter of “we really like our life these days.”  The thought that comes to my mind when I hear that said—and, occasionally, when I hear myself saying it—is “compared to what?”  There is a way of valuing the way you live now that slides into the sense that the way you are living now is the only way or the best way for you to live.  For that reason, it tends to obscure what would otherwise be obvious, which is that the way you are living is one good way among many possible good ways for you to live.  Is it really reasonable to give up this way only when you have to and to postpone any of the future good ways as if they were illusory?  I don’t think so.  It is natural, but mostly, I think we can do better by thinking it through.

So there are four approaches, chosen at random from a list that could have been a lot longer.  I want to clear those away so I can get a closer look at my own approach, which is: how will I know when the best time is to leave here and move there?  I have thought about this for a while and I have it down to two elements.

The first element is that I want to head off to Paleo Acres when my work is there.  I have a neighbor who is a woodworker.  He has nearly finished entirely re-doing their house: kitchen, floors, cabinets, rec room—nearly the whole house.  His work is where the house is.  That’s where it has to be.  My work isn’t like that.  My work has more to do with ideas and conversations and caring about people and being willing to be cared about and teaching and learning and reading and writing.  And, since I am writing this in March, with NCAA post-season basketball.  Those are my work now, as Bette and I are living here in the only house where we have lived together.  It will be my work then, when we arrive at Paleo Acres.

For me, so far as this first idea is concerned, it’s more a choice of venue.  And “work” is just a metaphor.  I call the whole pattern of working and playing, “work.”  I might just as well call it “the way I live.”  In some settings, I think I would call it my “ministry.”[2] The point of this designation is that I hope to continue doing what I am doing for as long as I am able.  That is what I want in the forefront of my mind.  I want to put the question of where I do it in the back of my mind.

It is going to be easy, in any case, to mourn the loss of familiar surroundings.  Remember that third step that always squeaked?  Remember the show the hummingbirds put on for us when you put out a fresh batch of sugar water?  Remember the sight of the Tualatin Valley in the morning with the fog packed densely over the river and visible hardly at all anywhere else?  Those are all good things and I know that when I leave them, I will miss them.  But imagine what my life would be like if I couldn’t “do my work,” i.e., to “live my life.”  And all the practices that are familiar in that way, I will take with me IF I go soon enough.

The second element points out the advantage of being “there.”  I have no idea, of course, what the physical course of my life will be.  You don’t either.  We all play the odds.  But let’s say I can count on another ten fully functioning years.[3]  If Bette and I go to Paleo Acres when I am 80 and she is 71—the current plan—I am going to be one of the relatively resource-rich people there.  I can go for walks with new friends.  I can drive someone to see a doctor.  I can carry on a conversation about political events.[4] I can remember to bring the beer to the Superbowl party. I can be the one who invites people over to see movies or who serves as the sheepdog of a book group.[5]

If I don’t get there in tim 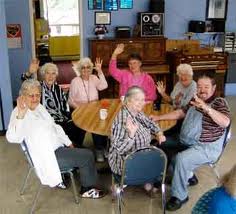 e—and I won’t if I stay here as long as I am able to— I can’t do those things.  If I wait to go to Paleo Acres until I am no longer competent to live in my present home, I will never be one of those people who helps make Paleo Acres a good place.  I will be someone who benefits from its being a good place, but I will have no part in making it what it is.  I will have no part in making “this is how we do it here” and affirming and clarifying culture.

If I do get there in time, I can belong to the group of people who provide resources.  I will know the other members of the group in that capacity and they will know me in that capacity.  And as I lose my ability to do those things, I will still know these people in that way—because that is who they were when I met them—and they will remember me in that way as well.  I won’t be the new guy who began drawing down the pool of social capital from the day I arrived.  I will be the old guy who served long and well until his abilities began to fail him.

[1] Presumably these are the same folks who would run the “death squads,” purportedly embraced by Obama’s Patient Protection and Responsible Care Act.

[2] I have been much more tolerant of ministry as a word I could use since I discovered what kinship it has with minus and minor (meaning small).  In fact, if we had a word “admagistrator,” instead of magistrate, using magus (large), it would be the perfect foil for administrator.  So a ministry of small gifts is almost a redundancy.

[3] It’s just a number.  I actually like my life and I would be very grateful to have another twenty years of the kind of life I am living now.  On the other hand, death really isn’t a big deal for me, so it isn’t true that the big thing about “living” another twenty years is that it postpones dying.  I have felt this way in, so far, Illinois, Ohio, Pennsylvania, and Oregon.  I mention those because when I was a mere lad, I read this admonition from the Apostle Paul: “I have learned in whatsoever state I am, therewith to be content.” (Philippians 4:11).  There is no way to know for sure just what states Paul had in mind, but my set goes from coast to coast.

[4] You might not think it, knowing that I have been a political science professor most of my life, but I am really good about talking politics with nearly anyone who is willing to be civil about it.  A fair amount of my time in class has been spent constructing structures, within which fairly goofy questions can be treated as sensible and to which answers can be found.

[5] A book group without someone to herd in the stragglers and clarify the reading schedule and the times we are supposed to meet will not be a very long-lived group.  Really, somebody has to do that.

9 Responses to Remembering to Leave in Time