Joe Nocera, the New York Times columnist shared with us today that Starbucks has an idea that might help us all.  Here’s the short version. 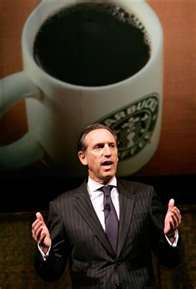 In effect, Schultz thinks the country should go on strike against its politicians. “The fundamental problem,” he said, “is that the lens through which Congress approaches issues is re-election. The lifeblood of their re-election campaigns is political contributions.” Schultz wants his countrymen — big donors and small; corporations and unions — to stop making political contributions in presidential and Congressional campaigns. Simple as that.

I have to say that a part of me likes that.  The most important thing to a congressman is continuing to be a congressman and the way to do that is to attract more political contributions than any potential opponent.

Now what is this going to accomplish?  Here’s the way Nocera puts it.  “… an idea had begun forming in his [Schultz’s]  mind about how to force the country’s dysfunctional politicians to stop putting party over country and act like the leaders they are supposed to be.

Even if Schultz’s idea worked perfectly, which it won’t, how is threatening the corporate/union source of campaign funding going to put country over party?  Does anyone think that congressmen aren’t going to bump down to the next most available source of funds?  Putting country over party, in the context of a fiercely ideological two party system in which the primaries are controlled by the most ideological members of the parties—that’s what we have now—is the surest way not to be back to the job.  So the congressmen most attracted to Schultz’s scheme will be the most likely not to return to Congress.

Further, not everyone is going to agree to practice the interdiction of campaign funds that Schultz prescribes.  And even if left wing funders and right wing funders participate in equal numbers, we will see that funding is a highly stratified business and largest sources of funding will do whatever is in their interest, no matter what the smaller sources do.

So it isn’t going to work.  There is an alternative though.  John Kenneth Galbraith provided it many years ago in his lovely little tract, A Tenured Professor.  A member of the brain trust that worked this out suggested that they be called Political Rectitude and Integrity Committees.  Probably no one will notice that they are called PRICs, right.

If a legislator took money from a Political Action Committee, his or her opponent in the next election would get the same amount, maybe even a little more, from a committee supported by Marvin’s financial enterprises.[1]  Taking PAC money, a member of Congress would thus subsidize his or her own opposition; in a sense, corporate PAC money would pay for an opposing stand.  Maybe then the congressman or senator would have second thoughts about PACs, and that would lead to a cut in the matching cost.

[1] Marvin is the “tenured professor” of the title.  This passage and a little context can be found on page 146.